January 9, 2015 – TIME Magazine names A Northern Light one of the 100 best young adult books of all time!

Winner of the Carnegie Medal, the L.A. Times Book Prize, the Borders Original Voices Prize, and a Michael L. Printz Honor, A Northern Light (A Gathering Light in the UK) is a coming-of-age story set against the backdrop of a true murder which took place in the Adirondacks in the summer of 1906. 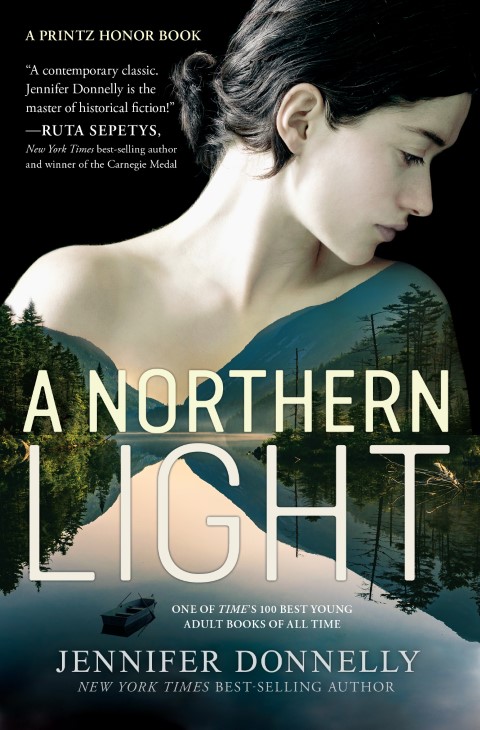 It is 1906 and Mattie Gokey is trying to learn how to stand up like a man — even though she’s a sixteen-year-old girl. At her summer job at a resort on Big Moose Lake in the Adirondack mountains, she will earn enough money to make something of her life.

That money could be a dowry to wed the handsome but dull Royal Loomis. It could save her father’s brokeback farm. Or it might buy her a train ticket to New York City and college and a life that she can barely allow herself to imagine.

But Mattie’s worries and plans are cast into a cold light when the drowned body of Grace Brown turns up – a young woman who gave Mattie a packet of love letters, letters that convince Mattie that the drowning was no accident.

Inspired by the sensational Chester Gillette murder case of 1906, which was also the basis for Theodore Dreiser’s An American Tragedy and the film A Place in the Sun, this story evokes novels such as To Kill a Mockingbird, Little Women, and other classics that hark back to times of lost innocence.

Even though I haven’t written very many books yet, people are starting to ask me where I get my ideas. This question makes me laugh. I’m always tempted to say, “Oh, I get them at Target. Unless there’s a special at Walmart. Then I get them there.”

I’ll see something, or read something, or visit a place. Somebody will put something in my hands – a book, an old photo. Maybe I’ll hear a snatch of conversation, or smell something – roses or coal smoke or cinnamon – and suddenly it’s there: a small, strange tingle of recognition that this thing, this feeling, this idea, this story, is meant for me.

I become fascinated. Captivated. Compelled. Obsessed. I go to bed and wake up again thinking about the story. I want to be with it, and I want to pull to myself anything and everything – a crumbling diary, shreds of fabric, yellowed postcards, an old balsam pillow – that makes it more real.

The tingle of a new story makes me feel stronger, taller, smarter, more alive. I have tons of energy and optimism and feel happy and excited. It’s a feeling I crave and one I wish I could summon on demand, though I know it doesn’t listen to demands. It comes only when it’s good and ready. I think it’s a lot like the feeling of falling in love.

The tingle for A Northern Light started a few years ago, when my mother and I were prowling around in a bookshop in Old Forge, New York, in the Adirondacks.

“Did you ever read this?” my mom asked me, holding up a copy of An American Tragedy by Theodore Dreiser. I hadn’t and she said I must. The book is a fictionalized account of a murder that occurred on Big Moose Lake, on the western edge of the Adirondack Mountains. Dreiser’s book affected me very deeply and I began to read all that I could about the real case, in which a young man named Chester Gillette murdered a woman he’d made pregnant – a nineteen-year-old farm girl named Grace Brown.

Gillette was apprehended and convicted for the murder, and instrumental to that conviction were letters Grace Brown herself had written to him. In them, Grace pleads with Chester to come and take her away before her condition becomes apparent. The letters are full of fear and desperation, but they also show this young woman’s intelligence, humor, and wit.

Grace’s words were the tingle. I couldn’t stop hearing her voice, couldn’t stop grieving for such a young, lovely life so callously snuffed out. Mattie Gokey, the heroine of A Northern Light, was born, in part, because I wanted to change the past. I wanted to know that someone had been kind to Grace on her last day. That someone had smiled at her, and exchanged a few pleasant words.

Falling in love – with a person, or a place, or a story – changes your life. And Mattie and Grace have changed mine. I finished the book last summer, and I felt sad when they let me go. And lonely and pointless. It was like a good friend moving far away.

But just the other day, I was cleaning out some files to make room for all the xeroxes and old postcards and photos I’ve accumulated while researching A Northern Light, and I came across an old, yellowed newspaper clipping that I stuffed in there while ago. It was just a small article from the depths of Section A of The New York Times, a few lines on people and events of a long time ago. But I felt something funny as I read it. Something that made my ears prick up and my hands tremble and my heart beat a little faster.

I think it was a tingle.

Read an excerpt from A Northern Light.

Listen to a sample of the audiobook, read by Hope Davis.

Buy A Northern Light from Amazon, Barnes and Noble, or your local independent bookstore.