East London, 1888 – a city apart. A place of shadow and light where thieves, whores and dreamers mingle, where children play in the cobbled streets by day and a killer stalks at night. Where shining hopes meet the darkest truths.

Here, by the whispering waters of the Thames, a bright, defiant young woman dares to dream of a life beyond tumbledown wharves, gaslit alleys, and the grim and crumbling dwellings of the poor. 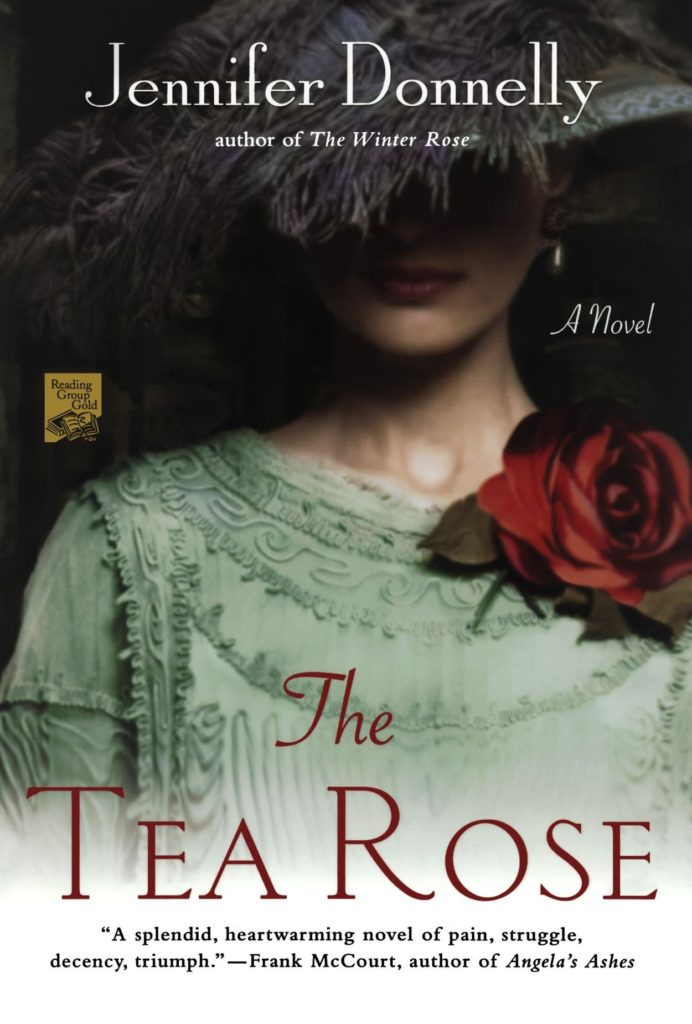 Fiona Finnegan, a worker in a tea factory, hopes to own a shop one day, together with her lifelong love, Joe Bristow, a costermonger’s son. With nothing but their faith in each other to spur them on, Fiona and Joe struggle, save and sacrifice to achieve their dreams.

But Fiona’s plans are shattered when the actions of a dark and brutal man force her to flee London for New York. There, her indomitable spirit – and the ghosts of her past – propel her rise from a modest West Side shop front to the top of Manhattan’s tea trade.

Fiona’s old ghosts do not rest quietly, however, and to silence them, she must venture back to the London of her childhood, where a deadly confrontation with her past becomes the key to her future.

The Tea Rose is a towering old-fashioned story, imbued with a modern sensibility, of a family’s destruction, of murder and revenge, of love lost and won again, and of one determined woman’s quest to survive and triumph.

Authentic and moving, The Tea Rose is an unforgettable novel.

Funny, isn’t it, how most people who believe in reincarnation are convinced they were once queens and kings, priestesses, generals, artists and shamans?

I’m not really sure if I believe in reincarnation. Maybe a little bit. I am sure about one thing though: if I did live a previous life, I was no queen. I was a slum dweller.

The only time in my life I ever had an “I’ve been here before” feeling was when I lived in London and my landlord, Clark, took me to the Brick Lane market in Whitechapel. Clark loved antiques. He had a Model A Ford. I thought then that it was just a funny old relic, but now I know it was really a time machine.

We drove east from Notting Hill early one Sunday morning. This was about sixteen years ago. Long before Oasis, Madge and Guy, and the whole Cool Britannia thing. Notting Hill wasn’t tony then. And East London? It was totally off the map. There were no wine bars or posh hotels. No multi-million dollar flats or art galleries. There were lots of crumbling houses, though. And dark, cobbled alleys. There were smoky pubs, boarded-up warehouses, and silent, brooding wharves.

I remember with amazing clarity how the charming, pastel houses of the Portobello Road became the squat, sooty brick dwellings of Whitechapel and Spitalfields. I’d read about this area; it was notorious. It was Jack the Ripper’s London. General Booth’s London. Annie Besant’s and Ben Tillet’s London. The Kray brothers’ London. It was a worker’s London, where dockers, factory hands, builders, seamen, and costers lived. The smallness and plainness of the houses spoke of hard lives and meager resources. They were strangely comforting in their bleakness. Familiar, inevitable and bittersweet. Seeing them felt like coming home. I’ve never fully understood why.

Clark pulled up just before a rusted railway overpass. As he cut the engine, I heard music. We walked under the bridge. Large iron doors had been unlocked, revealing rooms built into the structure of the bridge itself. They were filled with market people selling all manner of goods: costume jewelry, packets of custard mix, bags of candy, old shoes. On our way back to the street, I noticed a group of men standing outside the doors. They quietly passed pieces of gold jewelry back and forth — thick bracelets, clunky sovereign rings — nodding, talking, occasionally dipping a hand into a pocket to fish for a loupe or a thick wad of notes.

When we emerged on the other side of the bridge, I discovered the source of the music. Big, burly costermongers were singing the praises of their fruits and vegetables. They smiled and winked as they did, their voices rising in competition. Watching them, I felt as if I’d left modern day London and stumbled into the same city that Johnson, Hogarth and Dickens knew. We bought some clementines and walked on, passing in and out of musty warehouses, stalls, sheds and old stables. Picking up trinkets. Tripping on cobbles. Sampling apple fritters, jellied eels, pickled whelks. I found a rhinestone necklace for a pound. A tweed jacket for two. Clark found a toilet.

I found something else that day, too — inspiration.

East London was a shadow city to the western metropolis, a place to soothe a darker heart. It was honest and raw and in its own hard way, breathtakingly lovely. I was utterly captivated. I fell deeply in love with it and knew that I wanted to write about the place and its people. I made many, many trips back, spending countless hours in the narrow streets of Shoreditch, Whitechapel, Spitalfields, Wapping, and Limehouse doing research and storing up sights, sounds and impressions for what would become The Tea Rose.

This love affair between me and East London has endured even though we don’t get to see each other much anymore. Even though Wapping’s High Street has been developed and there’s a Starbucks across from the Spitalfields Market. Even though so many of the ruined, quiet places that I loved are no longer ruined or quiet.

I still get a feeling of having crossed over some tangible boundary when I get off the tube at the Liverpool Street Station, though. I can still lose myself in the winding lanes, and I still feel distinctly uneasy walking down Hanbury Street after nightfall.

I hope I always do.

Buy The Tea Rose from Amazon, Barnes and Noble, or your local independent bookseller.