Two girls, two centuries apart. One never knowing the other. But when Andi finds Alexandrine’s diary, she recognizes something in her words and is moved to the point of obsession. There’s comfort and distraction for Andi in the journal’s antique pages—until, on a midnight journey through the catacombs of Paris, Alexandrine’s words transcend paper and time, and the past becomes suddenly, terrifyingly present. 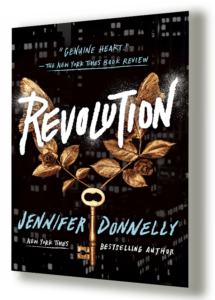 The story centers on two girls – one who lives in present day Brooklyn and has suffered the loss of her younger brother. And one who lived in 18th Century Paris and witnessed one of the worst crimes of the French Revolution. Andi, the Brooklyn girl, travels to Paris, becomes obsessed with a diary that belongs to Alex, the French girl, and their stories converge.

Revolution got started ten years before I published the book. I was reading the New York Times and saw an article – “Geneticists’ Latest Probe: The Heart of the Dauphin.” It showed a picture. Of a glass urn with a heart in it. I couldn’t take my eyes off it. The article said that a human heart, very small and very old, that had been in a glass urn in the Basilica of St. Denis in Paris, had just undergone DNA testing and had been found to be the heart of Louis Charles, the son of Louis XVI and Marie Antoinette.

I knew, as you probably do, that during the French Revolution Louis and Marie Antoinette were imprisoned and eventually guillotined by the revolutionaries – who were at that point led by Robespierre. What I didn’t know, though, was that after the king and queen were executed, their children – fourteen-year-old Marie-Therese and eight-year-old Louis Charles, the dauphin — were kept in prison. Marie-Therese would survive her imprisonment and would be released in 1795. Louis-Charles was not so lucky.

As heir to the throne, he was seen as a threat by the revolutionaries. It was rumored that powerful people were plotting to free the child and rule in his name. To prevent this, Robespierre and his crew essentially had Louis Charles walled up alive. He was kept in a small dark cold cell. Alone. Without books and toys. Without enough food or a fire. He became sick. And he went mad. And eventually he died. At the age of ten. 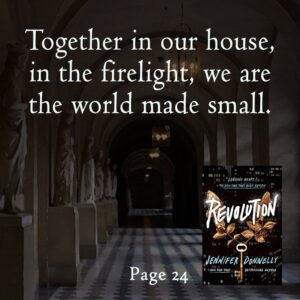 And in one not so wonderful way – after I had my daughter, I somehow lost my protective shell. The one we all have. The one that enables us to hear a horrible story on the news and still go on with our lives. When my daughter came along, suddenly every news story about an abused child destroyed me. The dreadful pictures of maimed soldiers and civilians coming out of Iraq made me weep. Reports of atrocities in Darfur undid me.

As a new mother, I knew what a child was in a way that I had not before. I knew how fragile and innocent children are. And that someone could hurt them, that they could starve in a famine, or be injured by a bomb….well, I could not understand that and I couldn’t bear it and I wondered, as I never had before, what kind of world is this that allows it? How do we manage to live in it? How do we raise children in it?

I’m sure a lot of people would say it was hormones, some kind of postpartum thing. I don’t know. All I knew was that these questions were haunting me and  I had to find answers. So I set about trying to do that the only way I know how, by writing a story.

I remembered that article I’d cut out of the Times – the one on Louis Charles – and I fished it out of its folder. His story took on a new and symbolic meaning for me. What happened to Louis Charles was unspeakable, and yet, I felt that if I could face it and grapple with it, it might help me find my answer.

So I started in. And let me tell you, it wasn’t easy. In fact, Revolution is by far the hardest book I’ve written. I really struggled with it. With the form. Plot. Characters. With the research. Getting my hands around the causes and factions and power plays of the Revolution was a huge challenge.

Ten years after I first read that article in the Times, after I first saw that picture of the tiny heart in the glass urn, the book was completed. Just a few weeks ago, in fact.

It took me on a journey, this book, and how. It took a bite out of me. Cost me a lot of sleep. Etched lines on my face and on my own heart. But it gave me the answer I needed. And I hope that maybe it will do that for my readers… and for you.

Read an excerpt from the book.

Listen to an audio excerpt of the award-winning audiobook ready by Emily Janice Card and Emma Bering.

Buy Revolution at Amazon.com, Barnes and Noble, or your local independent bookstore.